Ah, the classic celery, where would much of European cuisine be without it? And for me, in East Anglia, our local, delicious, Fenland Celery is almost as ubiquitous as the potato is to Ireland. This is a dead giveaway for how to grow it – the Fens are notoriously marshy, or at least have soil which is very moisture-rententive. I never used to like the taste – bland and slightly bitter, or the texture – way too stringy, but that all changed once I had celery sent in an organic veg box delivery. It was delicious! I couldn’t believe how different it tasted… really fresh, crispy, a ‘bright’, salty flavour and there was no annoying stringiness. I have to tell you, it was a revelation.

Then along came celeriac into my life. Once only known as something off that unread, random page in a vegetable book, celeriac (aka celery root) also crossed my path in an organic veg delivery box, gotta lov’em! Celeriac is to celery what kohl rabi is to cabbage – essentially a root version of the same plant, bred to form a swollen root, rather than stalks or leaves above. The thing with celeriac is it’s almost like two plants in one – you get the root, but you also get a bit of celery-ish stalks and leaves at the top too, so I use both.

How and when to sow celery and celeriac

It’s easy to start by sowing from seeds in the late winter and early spring. For celery, I usually start in late January through to April, and celeriac I sow March and April. The seeds are absolutely tiny, but fortunately quite pale, so you can see them easily on the compost. I make trays of rough compost, topped with an inch of fine, potting or seed compost, and then just sprinkle the celery and celeriac seeds thinly on top. They are so small, it’s difficult to handle them and spread them out evenly, however once they start growing, and have a few leaves, you prick them out to their own modules or pots (3″) anyway. The seeds need light, so once you sow them on top of the compost, you don’t need to cover them up. Then just spray the surface with a mister. Otherwise you can wet the compost, and then sow the seeds on top of the moist surface. Keep them around 13-18C (roughly 55-65F), mine are in an unheated room which is typically about 16C year round.

They take a long time to germinate, so don’t be surprised if nothing happens for the first two weeks! Past sowings have sometimes taken as many as 25-28 days for me.

Celery and celeriac can be tetchy about cold weather and too dry conditions. So don’t plant out too early, you can acclimatise (harden off) the plants by putting them out in the daytime and bringing them back in for night. Wait until the temperature stays above 10C (50F for more than 12hrs per day, which will typically be in May or June, depending on where you live. Unless you have very moisture-retentive soil, then you’ll need to water it before a long dry/sunny spells If it’s too cold or too dry, celery and celeriac will go to seed. Pull off any old leaves from the outside of celeriac as it grows. I plant mine at 9″ spacing.

Best varieties of celery and celeriac to grow

My personal favourite for celeriac is ‘Giant Prague Improved’. This is a Victorian variety which grows quite well and isn’t as knobbly as come of the other types. Mine has never gotten massive, although I never watered it due to my soil type. Maybe if I’d watered it, it would’ve grown bigger?

For celery, ‘Redventure’ (yes, it’s red celery), and ‘Full White Self-Blanching’, are my favourites. As it suggests, the latter turns itself white rather than you having to dig a trench or cover the stalks in cardboard. Redventure and the self-blanching celery varieties are favourites of mine, because you don’t have to faff about with blanching via a trench or card, so they save a ton of time and back-breaking effort. Just plant out the white ones around 9″ apart in a block, and voila they shade each other. Redventure is it is very resistant to problems and just grows and grows so well. I’ve been growing it for a few years now and it has been an excellent plant, as well as tasting great and looking amazing.

Growing care, pests, and diseases of celery or celeriac

The easiest way to grow celery is to choose either a self-blanching type or the red celery. This will eliminate a lot of time and effort in making sure that the celery stays pale, crisp, and free from bitterness if a white celery, the red celery doesn’t require anything extra anyway. Just make sure you plant out in a block, rather than a single line in rows. This means that the celery plants will shade each other.

Celeriac needs some care as the leaves need to be kept to a minimum (3-5 leaves) in order to grow the roots to a decent size. Pick off leaves once they’re 3″ or more tall, a simple twist at the base should suffice.

Pests and diseases of celery and celeriac

Leaf Miner can affect celery or celeriac. Celery fly maggots bore holes in the leaves. You must pick them off and burn them, otherwise spray the leaves with a liquid manure which will deter the flies from laying eggs in the first place.

Leaf Spot and Damping-Off can affect celery plants. If you get small browny-yellow spots on your leaves, this is leaf spot and you must pick them off straight away. I don’t actually know what causes this, but I have seen it once on my self-blanching celery. Damping-off is when you get a soft rot in your celery due to lack of air or too much water. Planting at the correct spacing and only watering when the weather is dry should prevent damping-off from happening.

When to harvest celery and celeriac

Celery can be harvested August to October (get it out before it gets too frosty) by cutting at the base with a sharp knife. Celeriac is way hardier and can be harvested from October to March, but just make sure you cover the roots with some straw or other similar material to protect them from too much frost. They can basically be left in the ground and pulled when needed, or stored in a shed in some light compost.

A fun thing I like to do with with celery is to pull the entire plants, cut an inch or two from the base, use the tops for cooking or eating raw, but re-grow the bases. This is cool thing to do with the kids – just pop the base in an old mushroom tray or small dish and put half an inch of water in the bottom. Put them in a sunny-ish windowsill and add water when needed. The celery will re-grow from the middle of the base! 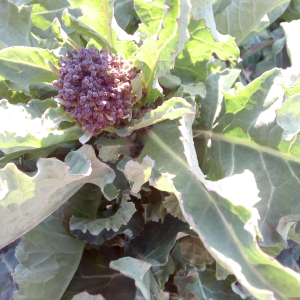